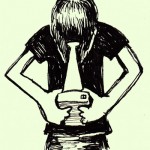 Berlin-based 8bit musician Flashbob started out in 2005 when he got his hands on a then sold-out Gameboy-Cartridge of the music app „LittleSoundDJ“. The „Nintendo Music“ novelty appeal quickly gave way to a dedicated fascination of obsolete sound chips and their individual quirks and flaws. Since then he has released a still growing number of tracks all over the 8bit netlabel scene, exploring the sonic capabilities of the NES, the Atari 2600 and other platforms. In 2008 he started to take a purist set-up of two Gameboys on stage and on the road, delivering an eclectic trip through the left field of Chiptune music.
Flashbob’s most recent full-length releases appeared on Cambridge based netlabel Kittenrock.